Leveraging history and heritage for place

Place marketing inspiration can come from the most unusual sources. At the heart of place marketing is the identification of unique and special place assets that shape the place brand and narrative.

That narrative for Derry, my closest city in Northern Ireland has been shaped by Civil Rights and “The Troubles,” economic decline, and peripherality in Ireland or the UK (depending on your politics). For years, Derry’s story was one of disintegration on many levels – economically, politically and socially. It’s a place that couldn’t even agree on its own name and Derry / Londonderry gave rise to the non-contentious Stroke City moniker. An altogether different type of place brand.

A visit to the City Cemetery was not where I anticipated to uncover a new perspective. Sitting on a hillside, with magnificent views of the City and the River Foyle, the cemetery offers up a new City narrative, about its resilience and fortitude, economic highs and lows, societal changes and major development phases that it’s already been through.

Audacious monuments for industrialists made rich through the textile industry are close to the paupers’ graves section. A row of World War 2 veterans, many international, face Republican graves – soldiers of different eras, with very different struggles resting in peace together.  Luminaries like John Hume, a Nobel Prize winner, alongside more ordinary but still much-loved men, women and sadly children.

It is fairly unique in an Irish context to have Catholics and Protestants, many of whom will have lived within sectarian confines to now be at rest side by side. Polarisation is familiar to us in Northern Ireland but is spreading faster than Covid it seems across so many other countries. So, even this form of togetherness is strangely reassuring, hopeful and a reminder that shuffling off this mortal coil is the ultimate levelling up.

As I was leaving, a chance encounter with the resident cemetery caretaker informed me that the Council use tours of the graveyard to promote cross community understanding and engagement and how the various phases and expansions of the graveyard mirror the story of Derry’s prosperous textile heights, industrial decline, descent into troubled times and gradual reinvention as a cultural and diverse economy. More by accident than design perhaps, it has become a significant cultural place asset.

Derry is poised for renaissance which will be greatly helped by the funding from its City Deal. That now looks closer after the announcement last week that the “Heads of Terms” were agreed. Some £250M of investment will provide a major boost for place development initiatives and to further evolve the place narrative. It marks a new era for the City. Far from disintegrating, it is a City ready to reclaim its prominence as an economic hub, a University City, a centre for innovation supported by a plentiful supply of skills. It is a cultural centre for music and art, a foodie paradise, awash with sports, (especially runners!) and hosts one of the biggest global festivals for Halloween. More thrills than scares these days.

The Cemetery reminded me that Derry has had much more to contend with than most places.

And that all places can be resurrected. 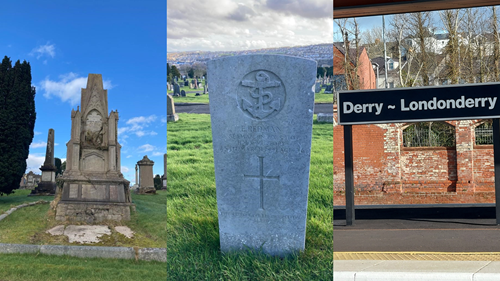 Want to discuss a project or work with us?