Levelling up is often cast as a North vs South or a London and SE vs other regions issue. Whilst there can be no debate that London and the SE outperform other regions in the UK based on numerous economic indices, eutopia’s VISTA index on place attractiveness also highlights that there is a need for levelling up within regions. This is likely to be compounded by COVID and the places that were previously disadvantaged are those that will be most susceptible to the negative side of the K shaped recovery.

The best performing cities in the UK from a place attractiveness perspective are reasonably dispersed as highlighted in the map below. The Vista index for overall place attractiveness shows that the worst indexing areas are often satellite towns and cities on the edge of these regions. This is not just a factor of scale – more than 40 influencing factors have been gathered across 108 towns and cities as part of the Vista model development to create an overall ranking.

The extent of the gap in place attractiveness is important between neighbouring cities and towns.

This trend is especially evident in the North West and North East but large gaps also exist for towns and cities across the UK as can be seen in the map. The graphic below highlights some of the specific regions. 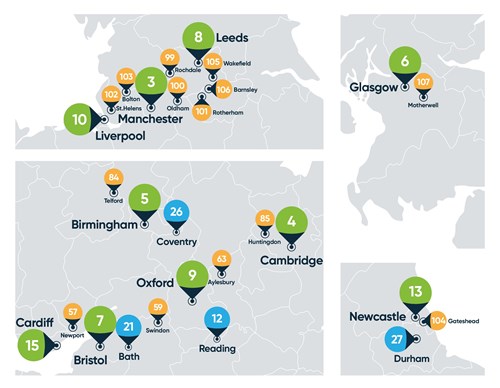 There are some exceptions which have developed more as “independents” away from their core regional hubs. These include locations like Reading, Bath, Durham and Coventry. One of the common features of these towns, is that they have the legacy of a strong university offer and they all benchmark higher than average for investment and tourism so have a relatively strong offer across key place pillars. 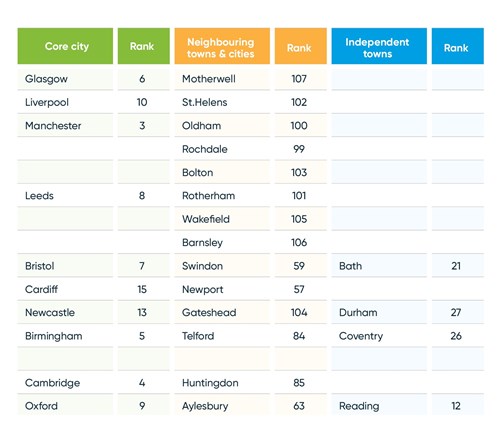 Some key takeaways from this analysis. 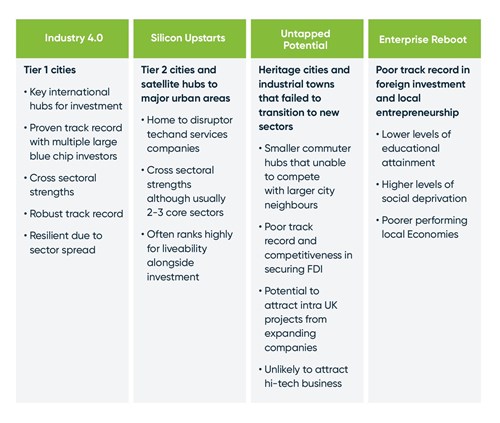 The characteristics of this segmentation are outlined above and demonstrate one of the core issues underperforming places have faced has been the concentration of investment to the core cities.

What can be done to address the issues?

For a full Vista report on your location, including recommendations on how to improve your place attractiveness rankings, contact us.

Want to discuss a project or work with us?